Up to 10 percent of blindness in the United States and up to a quarter of it worldwide may be attributed to uveitis. The condition most commonly affects people 20 to 60 years of age and does not affect one sex more than the other.

When the middle portion of the eye is inflamed, irritated, or infected, it is called uveitis. Any or all of the three structures of the uvea may be involved. Typically, uveitis is a serious condition that potentially threatens eyesight.

Uveitis is always an urgent condition requiring immediate treatment by an eye care professional for the best chance to protect and preserve eyesight.

When the iris, by itself or together with the ciliary body, is affected, this is called anterior uveitis. Anterior simply means front.

Intermediate uveitis means the ciliary body only is affected.

Posterior uveitis is the term used when the choroid is the affected area. Posterior means the rear or the back.

It’s possible, and much more serious, for the entire uvea or middle eye layer to be inflamed. When this happens, it’s called diffuse uveitis.

This condition can be chronic, meaning it has an ongoing, underlying cause, or acute, meaning symptoms appear suddenly and tend to diminish with successful treatment.

Uveitis isn’t necessarily caused by an eye condition, and it may be related to some sort of systemic inflammatory disease, such as:

Toxoplasmosis is a parasite carried by domestic cats and excreted in their feces. It’s generally harmless to adults with normal immune systems, and most people develop immunity to this organism by the time they reach adulthood.

Toxoplasmosis is mainly a threat limited to those with compromised immune systems, pregnant women, unborn babies, and young children. Even then, the disease can be easily avoided, and there is no need to fear domestic cats because of toxoplasmosis.

Don’t allow young children to play in unprotected sandbox areas where cats may have left infected, buried feces. Young children may handle these feces and put their fingers or hands in their mouths.

This is a rare, zoonotic roundworm infection passed from domestic pets to humans through feces. Pets, particularly dogs, should be regularly treated for roundworms.

These tend to be non-specific and may not be present or painful for both intermediate and anterior forms of the condition. Teens and those in their 20s and early 30s tend to develop intermediate uveitis the most.

Both intermediate and anterior uveitis may present with an appearance or increase of floaters and possibly blurry vision. This will tend to occur in both eyes and may also include other symptoms, such as:

When more than one eye layer is involved, such as both the anterior and intermediate layers, this type of uveitis is called diffuse uveitis. It may involve an unpredictable combination of any number of possible uveitis symptoms. 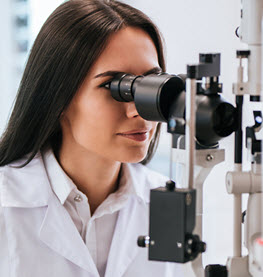 When your doctor diagnoses uveitis, treatment will begin immediately. This treatment focuses on preventing vision loss or limiting any that has already occurred.

Focused treatment will also aim to reduce or eliminate eye discomfort and stop the inflammatory process. In turn, this will relieve pain and prevent further eye damage.

Since the hallmark of uveitis is inflammation, treatment naturally involves stopping the inflammatory response from continuing. Typically, your eye doctor will use anti-inflammatory drugs to help your eyes recover from uveitis.

First, your doctor must determine what kind of uveitis you have and the likely cause. For example, uveitis known to be caused by a flare-up of a systemic disease like psoriatic arthritis would also need to involve treatment of psoriatic arthritis or PA.

Since PA is highly inflammatory, there may be some overlapping target medications that will relieve both the underlying condition and the uveitis. However, PA and other systemic inflammatory diseases also may involve biologic drugs not specifically used for uveitis.

Steroid drugs, such as prednisone and dexamethasone, are on the main front of uveitis treatment. These powerful anti-inflammatory drugs can stop the inflammatory process in its tracks.

Steroids typically produce a quick reduction in both uveitis symptoms and possible eye damage. Your doctor may prescribe corticosteroids in the form of eye drops, systemic injections, oral tablets, or capsules.

Since this drug family carries the risk of serious side effects, treatment will be limited to the lowest effective dose for the shortest amount of time possible. Most serious side effects are generally associated with chronic steroid use and are not a concern for occasional use.

Your doctor will be the one to make the final determination, but for uveitis, treatment with steroids will typically be worth the relatively small risk of side effects for short-term use.

Before your doctor prescribes medication, there will always be a trade-off of benefits versus risks to consider. This is just part of any medication regimen and is not limited to the treatment of uveitis.

These medications directly suppress the body’s immune system more than corticosteroids do. An example would be methotrexate, a drug also used to control certain types of inflammatory arthritis and some forms of cancer.

Treatment with these drugs carries the risk of serious side effects. Your doctor will decide if these risks are worth the benefits for you.

Because uveitis may cause a temporary rise in eye pressure, meaning the fluid within the eye is at a greater pressure than normal, your doctor may also prescribe eye drops to reduce this pressure until your eye recovers. Your doctor may also recommend drops to dilate the eye and relieve pain as part of your individualized treatment plan.

If your uveitis causes sensitivity to light, ask your doctor for relief with photochromic lenses, which darken upon exposure to outdoor light. You may also ask about polarized sunglasses.

Your eyesight is precious and worth protecting. Since many conditions, including serious ones like uveitis, may not always involve symptoms to warn you, you and your entire family need to get regular eye checkups.

Dilated eye exams are vital because they allow your eye doctor to examine the retina and optic nerve directly, identifying and treating potentially serious problems before they cause eye damage and vision loss.

Children may need vision correction and not even know it. Our list of top-rated doctors practicing in locations across the country are qualified to perform eye exams, prescribe glasses and contacts, and evaluate the health of your eyes.